This page started in 2006, and now after 10 years, I am archiving the early results and lengthy learning curve. This front page is now condensed to a summary, showing the best results, and technique to use spectrum analysis to your advantage.

All of my early graphs are stationary. Each test took 20 minutes, so were a snapshot of a location. Now that the technology and methods have improved, taking measurements when driving around, with the antenna outside the vehicle, can now show just how strong the cellular towers are in towns and cities. Or how little EMR there is in rural areas. Especially where there is no cel signal. These dead zones are becoming few and far between as the telecommunications industry pushes to "blanket the entire country in microwaves."

The following set of graphs show: the frequency ruler across the top, often with color coding for what use these bands are designated for. And along the left side is the location the sweep is at. Symbols such as local roads, key intersections, primary roads and highway, have different colors and symbols. The yellow center line indicates on an improved road, Grey pavement for state highway, "duke royal blue" pavement for county roads. Breaks in the yellow center line indicate key intersections, breaks in the white fog line are other side roads.
Getting the spectrum sweep synchronized with the geo-coding or location is done with a dash camera, and takes a bit of time to stitch together, or get synchronized. Once that is done, any unidentified signals of interest can be pinpointed to where they were measured.

Here's a look at just the GSM bands: since the majority of electro-magnetic-pollution, outside the home, comes from this source.
2016.Jan.26 - Scanning from 698 to 894 MHz, at 4 locations in downtown Republic, then driving to home.

For details, Hover the mouse or long press in the graph. Or click to enlarge to 4560x941 to see all the detail.

3G and 4G are in the 710 and 750 MHz bands, while 2G is above 850 MHz.
The first 10 minutes show stronger readings, while the readings stabilize as the device heats up. I recommend letting it warm up before starting to travel, so that accurate comparisons can be made later. Also a good time to top off the battery.
The wavy pattern is an unfortunate side effect of the cheap hardware. Just get used to it.
There are five spurs or birdies (above) on the E4000. These are solid lines of higher strength. Since they occur in a regular pattern or spacing, we will assume they are harmonics of the RTL-SDR itself. Comparing later with the R820T2 confirms it, as it only has spurs below 300 MHz.

Next I put aside the E4000 and try the R820T2 for a longer road trip:
2 locations in Colville. Skip to Kettle Falls. Record from Kettle Falls west on Hwy 20 over Sherman Pass (solid center line) into Republic. Park at 4 locations, then travel home via Klondike to Hwy 21 to Lambert Crk.
Now it is clear how much stronger the microwaves are in town, and just how much reaches the 2 dozen miles to the top of the tallest pass in Washington state. I can also now see clearly which cellular whine is reaching into the Lambert valley. Or to be more specific, this confirms what I have previously measured from Franson Peak in Curlew.
Regarding the strong narrow signals at 853 and 854 MHz, while it at first looked like a spur or birdie, after driving around it is now clear it is a real signal, something coming from the cellular towers.
Since the 3 new towers around Curlew Lake are still under construction, and not yet lit up, this will provide a point of comparison once they are on. I expect my home will no longer provide refuge after that point in time.
When scanning as much of spectrum as possible, the full width of the RTL-SDR capabilities are not as great as the Spectran or the RF Explorer, but being able to do the full width from a script on automatic, outweighs the limitations.
The first easy mistake is to have the antenna near the laptop doing the recording. It makes noise. The power supply also makes noise (from <24 to 225 MHz), so recordings are best taken on battery power. Recharge when stationary and not sweeping below 225 MHz.
I started out with the E4000 with the span of 55 - 2300 MHz. Only when I started recording with the NooElec R820T2SDR (24 - 1750 MHz), did I see the difference in quality. The E4000 just does not pick out weak signals as well. More trade offs, as usual...

Let's look at what else is happening, outside the cellular bands:
Click to enlarge to 20,371x107 to see all the detail. 40 seconds per line and TWENTY THOUSAND columns wide is perhaps bandwidth too narrow, but the details to pick out are awesome! FM radio, police and fire in the public service band 150MHz, business communications 450MHz, this RTL-SDR has emissions at 480MHz, LTE, GSM, What's this starting at 1610MHz? MSS is active! This is a new discovery.

Next a loop into Republic:
I got a really clean waterfall graph this time. The new strategy using 2 RTL-SDR at one time worked beautifully. This cut down the time per sweep to 20 seconds.
At 100.5 MHz is the local low power FM station with a small footprint. From 325-500 MHz is from the laptop. I can also see less noise when the lid is closed, with the screen off. The Republic cel-towers come into view, operating in the 2G and 3G-4G bands, 725-900 MHz. MSS is again visible in Republic, and again at home as something yet unidentified comes near.
Click to enlarge, and short infrequent transmissions become visible. Public service at 153 MHz. Around 485 MHz is really a mystery. I've been leaning toward it being the dongle, or the laptop. But now that the new TCO 2Plus RTL-SDR also picks it up, I can cross off one of the possible reasons. It went away when I was on the bumpy gravel road, and reappeared when I entered the paved highway, out in the open. The abrupt off and on still suggests interference of some kind, or a loose connection, so I'm not ready to make a conclusion yet.
Some activity in the new 4G band, devices sending up packets. The loudest 2G towers from 850-894 MHz show where they have good reception. MSS from 1600-1740 MHz is really interesting, from an investigative viewpoint.

Next a loop to the north and west:
This waterfall graph seems to show a lot of noise or interference from somewhere. If nothing else, this demonstrates possible pitfalls when taking measurements, like not knowing right away why these results happened.
The MSS (Mobile Satellite Services) above 1610 MHz is really interesting. It's not there until I travel west of Curlew, near the Canadian border, then disappears after Wauconda. wierd. VERY active in towns and cities though. Maybe something related to Border Patrol drones or other mil aircraft... thinking out loud... This is the band designated for Iridium, and not satellite internet, but being out in the most rural parts where DSL is not available, there might be an explanation here somewhere. I might conclude it got affected by high temperatures, but then I would also have to explain why the measurements dropped off in specific places, and increased going through town. So I'm going to have to repeat this, aren't I? ....

I'm not entirely sure why the dongle's emissions around 480 MHz come and go. I know this dongle emits noise at 480 MHz, but why go up and down? More likely my laptop is responsible for the increased noise here, but again why does it go up and down?
I am not happy with the DC power charger for the laptop, it's wide emissions around 75 MHz are really disappointing.

Next a loop to the east to Colville via Curlew first, and back by way of Republic:
Click to enlarge. Long journey over both passes, over 4 hours of recording at high resolution.

2016.Sep Then finally (not a good thing) I was required to travel to Spokane. Finally (now a good thing) I get to record the long trip to the big city and see the big picture.
Click to enlarge. This starts out from Kettle Falls, south through Colville into Spokane, and then out the west side via Wilbur, across the ferry and north on Hwy21, where I finally get some peace, up into Republic. 6 hours of recording at high resolution, separated into 3 blocks, before Spokane, between Spokane and the ferry, and from the ferry to Republic.

Subsequent tests for the MSS band:

R820T2 SDR spectrum graph 1600-1750 MHz
2016.Apr.11 16:12 - 16:34
Stationary outside on the home pad.
It comes and goes. Here one hour, gone the next. It almost looks like a doppler shift, or an intentionally roving frequency. But then the real question, from what?
2016.May Got another dongle, this time with TCO precision. Still there occasionally.
It is clearly always there when in town, so even if there is something wrong with my equipment causing elevated readings, there is definitely something going on in this band.
Then see below 1/2 page down that it does not show up on the RF-Explorer. So now what shall I believe... Every other measurement across the spectrum is consistent across meters, and are identifiable. Some day I'll get a breakthrough.

R820T2+ & R820T2 SDR spectrum graph 1600-1750 MHz
2016.May.04 10:12 - 10:13
Stationary on 6th St. in Republic.
Side by side test lasting 1 minute 40 seconds, the top antenna outside the cab was stronger reception, no surprise there, but the differences between the two are not entirely as expected. From this we can now say the signal is stronger outside, and really present, so that both antennas picked it up.

Next is testing the RF-Explorer with improved software, this is in Republic: 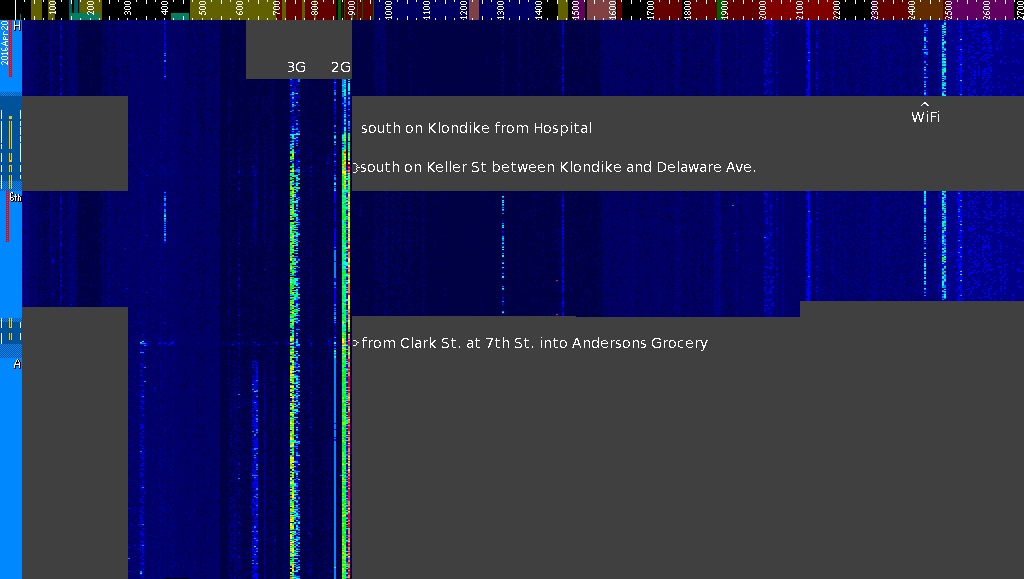 2017
2018
2019.Mar Finally did some follow-up recordings. Look at all the new activity... New 4G bands and lots of new cellular activity. Should I make this page larger, or add another page?

Rough roads was causing the usb connection at the laptop to glitch more often, so I stopped recording the spectrum for a few years.
2022.Mar Now with a Raspberry Pi4 I can make mobile recordings again, both with the same RTL-SDR as above, and with a HackRF which covers the spectrum up to 7GHz. Graphs coming soon...

There is a lot going on across the spectrum, and this is the way to discover what that is. Test, measure, repeat, identify.
Only by doing this testing can WE learn what is going on in the invisible spectrum, and by learning this, we can take steps to turn things off or only turn things on when they will not cause problems. Problems can include RFI during measuring, as well as biological effects, see my other EMR pages for that!
Just taking snapshots at single locations does not reveal the differences down the road. It is the differences in locations that tell the story we are interested in.

Now when a sudden headache comes upon me or my brother, my list of things to immediately check has a new entry:
1. Solar storm? 2. Neighbor WiFi? 3. Neighbor Cell phone?
now adding 4. MSS
cue the music for Perry Mason. Some people like mysteries to solve. For me this is more of an annoyance.
It's bad enough when the military training jets buzz the area. At least they are not overhead very long... Can't trust them, with what they're doing over the Olympic Penninsula making the news.
© 2006 - 2022   All Rights Reserved.
Stewart Andreason - electro-refugee with shielded computer.